There Are 75 Million US Adults On The Mobile Internet, More Than Half Of Them Daily

At this point is there anyone who questions that the “mobile internet” has arrived? While marketers and many search marketers in particular are still “experimenting” with mobile, consumers are checking in, accessing social networks and searching on their handsets in stores.

A trio of new reports released in the past two days confirm the growing and even strategic importance of mobility.

Pew Internet conducted a telephone survey of 2,252 US adults in April and May regarding mobile activity and behavior. The report contains more data than I can explore here. However the big takeaway is how large and engaged the mobile internet audience already is.

Here are a few relevant data points from the report: 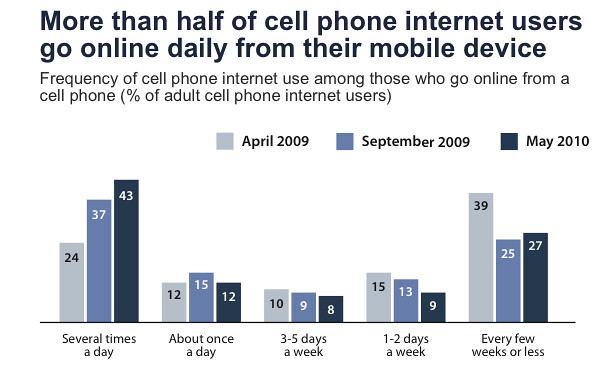 Next up, Compete released data from its Q1 online Smartphone Intelligence survey. Among other things, what the data show is that smartphone owners connect to social networks and use their handsets heavily while shopping.

Some verbatim, top-line findings from the report: Insight Express published data showing that consumers are increasingly using their handsets while shopping. It echoes and underscores some of the Compete findings.

Based on a June consumer survey of 1,300 US adult mobile users, 82% reported having used their mobile devices while in a store. 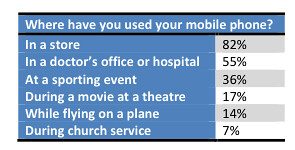 What are they doing? The report goes on to explain that people are checking reviews and prices, as well as looking for deals and discounts.

Most mobile search activity starts and ends — in one hour

Mobile user behavior is often quite different than the behavior of PC users. While that makes intuitive sense a statistic referenced by Microsoft’s Yusuf Mehdi and later presented by Dennis Glavin at last month’s SMX advanced makes that behavioral distinction very concrete.

During a mobile session I moderated, Glavin said that the time it takes for 70% of users to begin and complete a search-related task on the PC is about a week. By contrast 70% of mobile users complete their search activity — in one hour. This very clearly illustrates the “need it now” dimension of much of mobile user behavior.

With at least 75 million people now on the mobile internet in the US this is a “medium” that should not be ignored by marketers. It offers numerous opportunities to reach consumers when they’re highly engaged, looking for commercial information and often open to influence.