The Origin Of #nickcleggsfault & Getting To More Relevant Tweets

Yesterday, I moderated a panel on real time search where one of the topics was how to get the balance between showing recent tweets versus the most “relevant” ones right. Today, there came a perfect example to test — the trending topic of #nickcleggsfault.

For those unfamiliar with Nick Clegg, he’s the leader of the Liberal Democrat party in the United Kingdom, the “third party” behind the Labour and Conservative parties. Clegg made an unexpected strong showing during a recent televised debate, completely changing the dynamics of the election that’s in progress.

Now Clegg’s leading in another contest, that of being a trending topic on Twitter, as noted over at Search Engine Watch. Here he is on the front of Twitter Search: 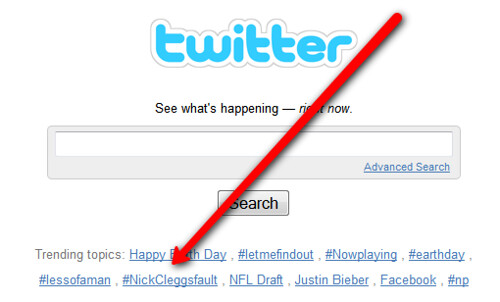 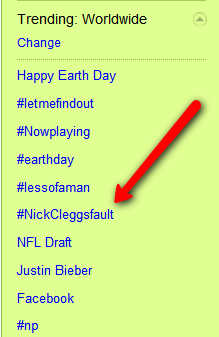 For those unfamiliar with hashtags, the little #nickcleggsfault text is a way for people to associate their tweets with a common topic –in the case, tweeting something and blaming Nick Clegg for whatever they’re talking about. When many people do this, it causes a hashtag (or topics in general) to “trend” on Twitter — a sign there’s a lot of buzz going on.

So what’s up with Nick Clegg’s Fault? How did this all get started? Could experiments with showing “relevant” tweets over “recent” tweets help?

Two weeks ago, Twitter  rolled out Most Popular Tweets. These are three tweets considered to be most popular on a topic you search for, shown above all the other tweets, which are order by the time they appeared. What do we currently get for #nickcleggsfault? 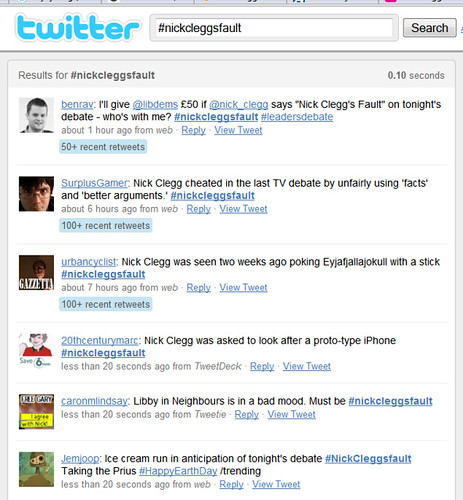 The three Popular Tweets are at the top with little blue “recent retweet” boxes under them. They’re funny. I particularly like:

There’s no question that these are all relevant. But none of them answer WHY this trend has started nor are any of them the first tweet with this hashtag. FYI, the results are the same just for nick clegg.

Over at Topsy, it recently rolled out a Featured Tweet at the top of search results that is effectively the same idea as Twitter’s Most Popular Tweets — to pick one great, relevant tweet and show it first. And we get? 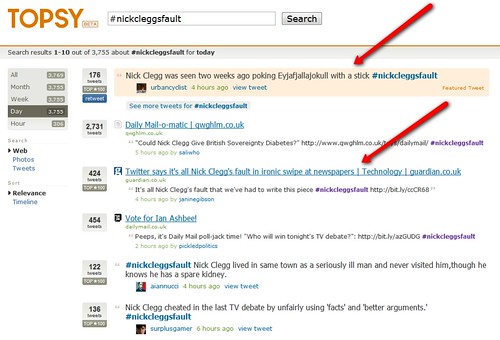 The top tweet is the same as one of the three Popular Tweets over at Twitter, funny, relevant — but not an answer to the mystery of why this is trending:

Ironically, it’s another twist to how Topsy ranks things that brings us closer to an answer. Unlike Twitter — where tweets are ranked in order by time — Topsy ranks tweets by the influence they’re estimated to have acquired. Who’s retweeting them, and how influential are those people? The Featured Tweet is like the best of the best at the current time — the other tweets are the best over a long period of time.

The second item from the screenshot above that helps answer how the trend started, an article from The Guardian covering how recently negative articles about Clegg in some of the UK’s other newspapers seem to have some people now thinking that Clegg’s going to be blamed for anything — it’s all Nick Clegg’s fault, hence the hashtag.

Seeking The Origin At OneRiot & Bing

But who started it? What was the first one? A search over at the OneRiot real time search engine brought up that same Guardian article along with other interesting items but still provided no answer.

Over at Bing’s Twitter search, it was funny seeing that poor Nick is apparently being blamed for causing a music festival to be canceled, among other things: 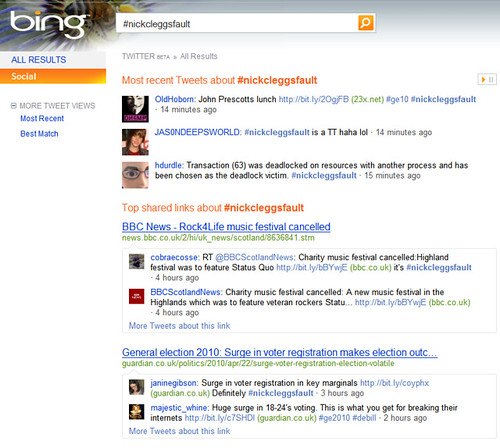 But again, what’s the origin? Well, another thing that Bing top listed was a link to What’s The Hashtag, where you can download a “transcript” supposedly off all tweets containing that tag. So I did — which nearly killed my browser, it was so large. But at the top of the list was this: 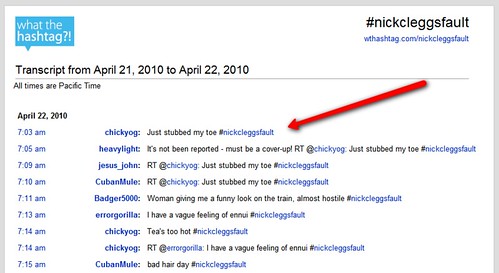 So is that it? Did this all get kicked off by chickyog (Justin McKeating) saying:

It’s looking good. Just before he made that tweet, Nick Barlow tweeted to McKeating about the election coverage

No, but when he does, the Telegraph and Mail will claim it’s Nick Clegg’s fault

That prompted McKeating to say “Ha. I feel a meme coming on.”

To double-check, I tried a few other things. First, I did a search on regular non-real time for Google’s real time search engine, to see what it was listing: 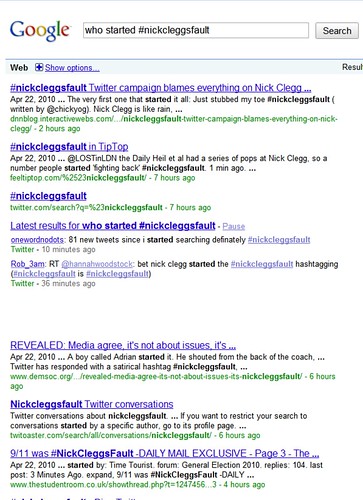 The top result was a blog post supporting the idea that McKeating kicked this whole thing off — though it doesn’t provide any proof of that (and appears to be just a copy of this Metro article that Google doesn’t list). In contrast, Google completely misses McKeating’s own post explaining what happened (I found that only after doing all this research).

How about Google’s own real time results? Well, a search there doesn’t show the original tweet – nor is the list of tweets on the left-hand side showing tweets in any particular “relevance” order: 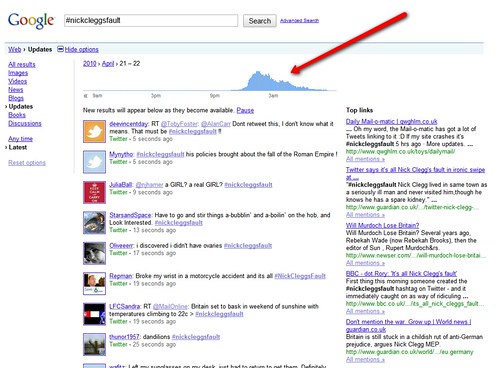 Instead, it’s first in, first to the top. Even if I sort by using the little “Any time” link in the left column, I don’t get any particularly “relevant” tweets.

In contrast, the “Top Links” area — added just last week — gives me better background but still doesn’t provide an answer to how things got started.

That’s where that little graph at the top of the page I’m pointing at comes in. That’s Google’s Twitter Archive Search, launched last week. It allows you to easily go back in time and see tweets at particular points.

And there you go, second confirmation. #nickcleggsfault is all chickyog’s fault: 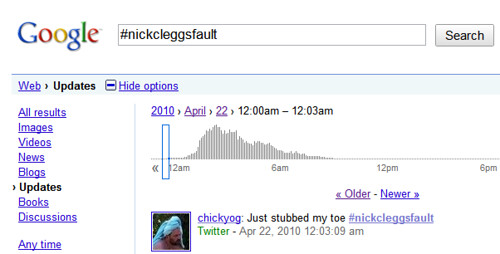 The takeaway from all this? Relevancy ranking of tweets still has a long way to go — and it’s further complicated in that for any search, there could be widely varied expectations. You might want an article about a subject. You might want the funniest tweet. You might want tweets from prominent and influential people, like celebrities or politicians.

You might also want the “first” tweet to kick off a trend, as happened in this case. Google’s new service makes it super easy to find that — but how much better if it or other services also found a way to highlight an origin tweet without requiring so much digging.