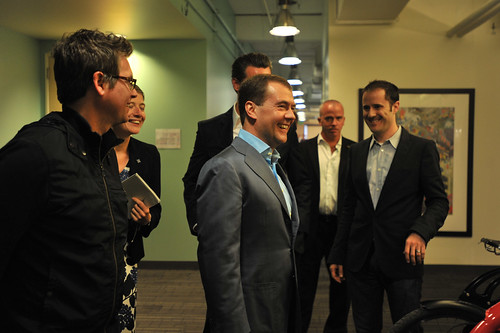 Twitter’s having its first ever visit by a head of state today, Russian president Dmitry Medvedev. He arrives at the company’s headquarters some time this morning, Pacific Time.

Medvedev isn’t on Twitter yet, but he’s apparently going to open an account while at Twitter today. That is, if Twitter stays up. The service has been struggling with issues apparently caused the large volume of tweets following wins by both the USA and England in today’s World Cup matches.

Hasn’t Twitter entertained heads of states before? Virtually, yes — with accounts for the US White House, the British prime minister’s office (plus Queen Elizabeth II, or at least her people) and many more (Twitter has a list of world leaders here). But Twitter cofounder Biz Stone, at a Bing event last night, told me this was the first time a head of state has ever visited the company’s physical offices.

Medvedev has other Silicon Valley visits, including to Google, where he’ll meet with CEO Eric Schmidt.

Postscript: Twitter now has a blog post up. TechCrunch also has a nice post up from the visit. Medvedev, or really the Kremlin, is now tweeting here in Russian and in English here.