Good morning from Seattle! The sun is shining outside and the coffee is flowing inside (as required by city ordinance) and day two of SMX Advanced is about to get started. Yusuf Mehdi, Senior Vice President, Online Audience Business at Microsoft will be sitting down in a few moments for a Q&A conversation with Search Engine Land’s Danny Sullivan. Yusuf’s division at Microsoft oversees both Bing and MSN.

We should be getting started in about five minutes, so stick around and follow along as we live blog today’s keynote. Back in a moment….

Here we go. Twitter is down and the conference is underway. Some things never change. We’re starting with a video showing the first year of Bing’s existence. The video talks about “search overload” and is reminiscent of those TV spots that have aired over the last year. Nice video, quite heavy on the promotion.

Danny also asked about the Colbert Report product placement this week, where Stephen Colbert said Bing repeatedly, getting paid $2,500 per month, to raise $150,000 overall for his Gulf charity. Here’s the clip (via the Huffington Post):

Mehdi said they gave Colbert full creative license on how he wanted to do it.

Danny asks how Bing knows that all of this promotion and PR is working. Yusuf says everyone is “working like crazy” and the first year “was a good start.” The way you know it’s working is that people are using your product. We’ve grown users — 20 million new users in a year. We’ve grown every month since we launched (ed. note: he’s referring to comScore numbers; other providers have shown Bing with ups and downs).

Danny mentions the (very strange) Bing-a-Thon that happened right after the launch a year ago. Yusuf says one of the challenges is that no one was looking for another search engine. Most people were happy with what they had. So Bing had to be a little crazy. And that was one of the things. Yusuf tells a cute story about his 8-year-old daughter surveying the other kids in her class, and she came home with a two-column list. “Kids who use Bing” and “Kids who use the other search engine.” She concluded by saying, “Daddy, we have a lot of work to do.” (Laughter all around) 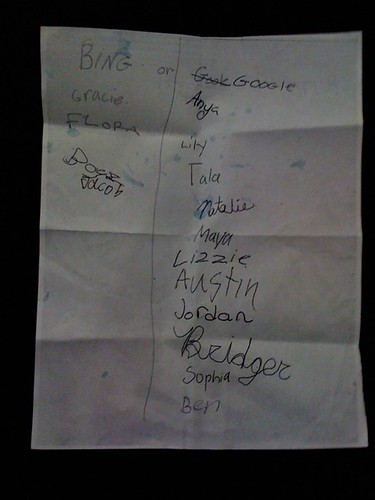 Danny asks about the partnership with Apple, and Bing now being a search option on the iPhone’s web browser. Yusuf says mobile is very important to Bing because it fits in with the “decision engine” approach. The Bing iPhone app has “been a huge success.”

Danny asks if Apple charges for inclusion. Yusuf says the companies agreed not to disclose terms of the agreement, so he can’t answer.

Danny asks about overall Microsoft spending on Bing. “We made a very big investment,” Yusuf says. He mentions the TV ads, spending on distribution deals, etc. Says Bing will continue to “do more innovative marketing over the next year.”

Next question switches to Bing features. Danny asks what has been working. Yusuf says the look and feel has been a big hit. Users have said it seems easier to find things (thanks to the left-column search options and so forth). Home page is very popular with kids in schools. He says the recent rollout of recipes “went nuts” with usage. Yusuf says images and video, travel, shopping, health, and local have been the most popular vertical search areas for Bing.

Now we’re talking about Bing Maps. Danny mentions the “map apps”, and Yusuf says they haven’t done a good job promoting it. Yusuf says developers will soon be able to build their own map apps.

Yusuf is talking about the value of social information — recommendations from friends and contacts. Bing social search is on display. Shows trending topics, Facebook and Twitter are sources. Filter by time and other options, including an option to see “firehose” of all updates. Shows status updates and most popular shared links. They’re not showing Facebook user names associated with the shared links. It also shows how many have shared the popular links. Yusuf says this will be launched within an hour.

They’re talking about Bing’s emphasis on stats. Danny mentions visiting Yusuf a year ago and being amazed by the stats he had about search. Yusuf shows how Bing does “a ton of data mining on query logs” to see how people search and find what they want. He’s showing a slide that begins with “family reunion lake tahoe,” progresses to things like “retreat lake tahoe,” “large vacation home to rent in lake tahoe,” and finally ends with “lake tahoe rental for large group.” Bing knows how much time the user spent on each query before searching again.

More than 40% of purchases happen more than two weeks after the initial search. But on mobile, 65% of action happens within one hour after a mobile search. “The data will show you the way,” he says. But “we have miles to go before we’re doing a good job as a decision engine. The work that has to happen is immense. We’re only in the very beginnings of that effort.”

Deal with Yahoo: Yusuf says they’re shooting to have the paid search marketplace switch by the end of the year, but they’ll delay it to 2011 if it’s not ready.

Yusuf says that an update to Bing Webmaster Tools is also coming soon. They’ll be showing it off at 10:30 am today here at SMX Advanced.

Now we’re doing public questions: First one asks when Bing results will show up in Yahoo search, and what will happen to Yahoo’s rich media, rich snippets, etc. Yusuf says plan is to migrate search and paid ads by the end of the year. Late fall is the target. Yahoo will have flexibility to add things on top of our results, he says. They can use our rich snippets, or choose to show their own.

Next question asks if Bing would consider sharing internal data about users, sessions, etc., so search marketers can better plan and work with clients on search ad campaigns. Yusuf says some of Bing’s internal data is very much in line with the public stats from comScore, etc.

Next question about various SEO-related search operators (like the “link:” operator that Bing has disabled). Yusuf says Bing is in discussion now with Yahoo about how much of that Bing should offer. They’re sharing ideas. “We’ll give you some plans on that in the near future.”

Danny wraps up with a birthday cake for Bing and we’re all singing “Happy Birthday” to Bing. And with that, we’re done with today’s keynote. Thanks for following along!