Local business owners can breathe a sigh of relief: Google has ended the “community edit” free-for-all in Google Maps. According to Tuesday’s announcement, “all community edits [will] be reviewed before they are shown.”

For local business owners, this means that competitors, spammers, jilted lovers, and the angry parents of the kid whom your son struck out last night at Little League will no longer be able to edit your business listing however they see fit. Huzzah! 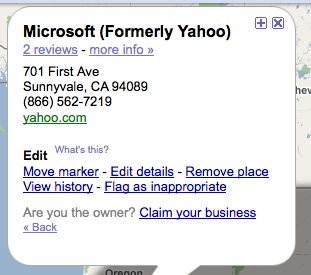 This “feature” (using the term loosely) got a lot of attention here on Search Engine Land when Danny Sullivan edited Yahoo’s business listing to show that the company had been acquired by Microsoft. (See image at left.) Danny’s trickery was inspired by Mike Blumenthal, who hours earlier had changed Microsoft’s business listing with a new business name (“Microsoft Escort Services”), location, and URL. (Hehehehe. Professor Maps FTW.)

Days later, Google somewhat famously responded on Mike’s blog, comparing Google Maps to a wiki-based product: “The wiki nature of Google Maps expands upon Google’s steadfast commitment to open community.” (That, in turn, prompted a rare rant from me about Google’s hypocrisy toward map spam vs. search spam. Good times.)

Late or not, this is welcome news from Google. We don’t know how many edits Google Maps gets on a daily or weekly basis, but Google seems ready to process them all manually before any edits show up in Maps. (Perhaps it’s those 300 new staffers Google is hiring.)

Even with the end of the community edit free-for-all, one important piece of local SEO advice still stands: Claim your Google Maps listing.