Earlier this month, Google began experimenting with some new local search results formats, according to a post by Linda Buquet on Mike Blumenthal’s Understanding Google Maps & Local Search blog. The new layout essentially replaces some regular keyword search listings with what were 7-pack listings, and moves the map to the right side of the page. The design appears to be good for consumers but devastating for the SEO of online business directories as well as for some small-to-medium businesses.

The new design might best be described as more of a business directory listings page than a keyword search results page. This new layout appears only for Google’s regular/main keyword search, when locally-oriented keywords are used, such as “dentist chicago,” and presumably doesn’t affect the layout of results in Google Maps itself. Previously, such searches resulted in regular “organic” listings of pages which the Google algorithm deemed relevant for the search query, along with a 7-pack of local listings from Google Maps embedded somewhere within the listings under Universal Search. In the new experimental layout what were 7-pack listings are now distributed within the main listing area of the page, with “A,” “B,” “C”… enumerated marker icons matched up to their locations within the small map image. The map is moved from the middle-left to the right hand column, above the sponsored listings, and its position stays within the visible area of the browser when the page is scrolled.

Others have been seeing the new layout, too, and we’ve been comparing notes. The new layout is better understood when seen, rather than described: 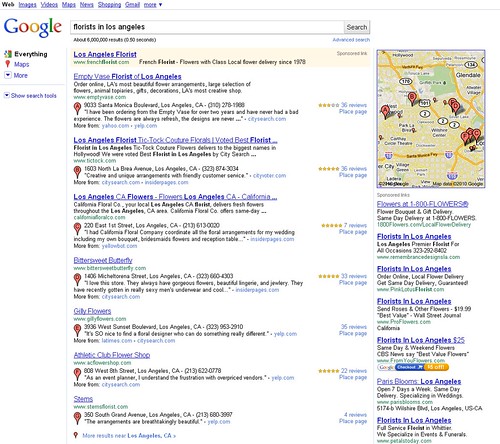 Mike Blumenthal quotes a Google spokesperson as confirming the layout test: “It is an experiment — we’re continually trying out new tweaks to a portion of our users.” But, the alternate design is considerably more than a “tweak”—it’s a major evolutionary change.

I can see some compelling reasons why Google would try out such a layout. From a usability and user-experience perspective, the new layout seems to provide searchers with a handful of improvements. Users want all the “answers” to their queries when submitting keywords to a single, unified search box (which is why Google introduced Universal Search in the first place). This appears to give them more of the Maps experience within the regular search results, satisfying that need for instant gratification.

Also, users do not want too many options—when seeking a business they want a top handful of listings, and not dozens upon dozens of links.

The also want to get those listings straightaway, as opposed to being made to click upon a secondary page that takes them to yet another page of listings from which to choose.

As you may know, Google desires to avoid indexing “search results in search results,” and as such their Webmaster Guidelines specify that one should use robots.txt to disallow search results pages from getting indexed. It’s easy to see why they don’t want search results in the index—imagine searching on Google for “blue widgets,” then clicking upon a result only to find it’s yet another page of search result listings for that query from another search engine site.

And this requirement surfaces a problem that has had me seriously concerned on behalf of online directories for some years now. It doesn’t take much to realize that many of the internet yellow pages (“IYPs”) and business directory listing pages from some of the top biz info sites could easily fall under the definition of “search results”.

Considering that Google has their own comprehensive business directory results now, it’s likely only a matter of time before they might begin penalizing or disallowing SEOed IYP listings pages. This new layout would achieve this pretty nicely by simply pushing indexed directory pages off of the first page of results.

During the past year, I’ve been asked multiple times whether I thought SEO might no longer be a viable source of traffic for IYPs. You may recall that I wrote about how Google’s move last year to invoke the local 7-pack listings for many keywords, based upon searchers’ geolocations, appeared to have strangled traffic of yellow pages sites which previously enjoyed higher prominence on search result pages. While that move certainly made things more challenging for the SEOs at IYP companies and other online directories, I felt that many of them had not done sufficient optimization in the first place. I still believe that SEO can and should be considered a major traffic/revenue source for those sites, even if this new search result layout goes into wide release. Most of these companies fail to detect the areas of opportunity remaining, and fail to execute upon them effectively.

As things currently stand, there’s no question that this design change would be seriously devastating to the SEO projects for most directory sites.

But, another question is: what will the effect of this be upon local small-to-medium businesses (“SMBs”)?

On one hand, you might think that the newer, larger listing treatment might be beneficial for the visibility of these businesses. But, think again—for any of them which have been doing significant search marketing activities, this sea change could easily result in far lower numbers of organic referrals. Companies which aggressively have been marketing themselves have often enjoyed placement within the 7-pack, as well as having their homepage ranked in the top organic results—real estate on the search result page in multiple places. Some even enjoyed presence in the top directory and social media pages that were ranking highly for the term as well. Under the new paradigm, these companies could lose overall referrals along with the spaces they enjoyed on the pages.

It virtually goes without saying that the change would negatively impact the CTRs of the sponsored listings in the right sidebar which will be pushed down by the new map position, too!

So, this experimental layout for local leaves me concerned. It seems potentially good for consumers, but very bad for SMBs, IYPs and even possibly AdWords advertisers.

Google’s overall philosophy of putting user experience above monetary concerns or any other priority is noble in most cases, but in the area of local businesses, there’s perhaps more context which should be considered. One might dismiss the probable negative impact to directory sites, but the likely impact to SMBs cannot be seen as acceptable. Will Google notice if businesses were to be negatively affected by the design change? Would they even care?

Some months ago, a handful of local search marketing professionals held a brief back-and-forth email discussion with one of Google Maps’ product marketers over some upcoming UI changes that were in the works. We ultimately asked whether they performed any usability or focus group testing with small business owners prior to deploying changes (to the “local business center” now named “google places”), and we were shocked to hear that they had not.

So, it may not be surprising that a dramatic change could be in the works which might feel rather punishing to SMBs which have invested a lot in marketing themselves online and via search. Having such a change following the deployment of the new tag ads could feel unfairly extortionary to businesses which might be negatively affected, I would conjecture.

So, what are the options for IYPs and other local directory providers? This may drive more online directories to sign data provider agreements with Google Maps, and they should step up their SEO work to take advantage of unexploited areas as I’ve hinted at before. Oh, and perhaps the traffic to Bing will keep growing enough to take up the slack!

Postscript: After writing this, I saw Andrew Shotland’s hilarious post, “Dead Fingers Walking?,” and while it’s wonderfully snarky, it simultaneously makes a number of points about the impact to IYPs and the relative “evilness” of Google’s new experimental local search results.